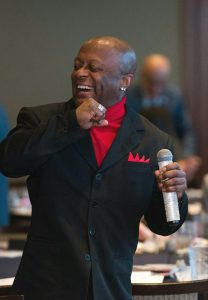 Royce Javan, also known in the music industry as “Royce the Voice”, after graduating from Brevard High School and earning a music degree from Mars Hill University where he was classically trained, spent many years in the Detroit Metropolitan area showcasing an extended variety of musical stylings and genres.

Following an extensive tour with the World Renowned Duke Ellington Orchestra as a teenager, he moved from North Carolina to Michigan and began his career as a mainstay entertainer throughout the area and across the United States.

Royce has performed with various artists throughout his career both locally and nationally. He has shared the stage with the likes of Tony Bennett, The Temptations, Gregory Hines, Harry Connick Jr, Roberta Flack, George Duke, David Sanborn, Al Green, Brian McKnight, Nancy Wilson, Ray Charles, Earl Klugh, George Benson, The Four Tops, Peabo Bryson and many others. He has also appeared as a special guest performer at the world-famous Apollo Theater in New York.

While in Detroit Royce became one of the National Anthem singers for the NBA Detroit Pistons and his voice has been featured on many different radio and television commercials as well.

He has also performed for numerous weddings throughout his career, notably for television actor Tom Arnold.

Royce, as a lead singer has front lined his own and other bands consisting of various groups ranging from single, duos up to 12 piece ensembles, the music ranges from jazz standards to the most current music on the market. The show also features original material written by Royce.

The vocal stylings of Royce are described as smooth with a mix of R & B, Jazz, Pop, Blues, Classical and a touch of gospel. Power ballads are a big part of his repertoire. He is classically trained with a bachelor’s degree in music.

As part of his musical growth Royce gives credit to the experiences he gained from various venues, artists and friends in the Detroit area and is proud to call himself one of Detroit’s own, in other words “Motown is always in the house”! The “D” will always be represented!

See you at the next show!

There are no upcoming events at this time.

Visual and Listening can also be found on YouTube.

I'm not around right now. But you can send me an email and I'll get back to you, asap.